Walkers, bikers, naturelovers and restseakers will feel their place here. The Veluwe has vast forests with beautiful heatherfields. Direct from the thouse you can walk to the Loenermark, the Imbos and the Heatherfields of Zilven. You can reach Park Hoge Veluwe when you go to Hoenderlo or Otterlo. Going south you reach the Veluwezoom and to the east you find the river IJssel and the Achterhoek with his so called bocage.

At small distance by bike you reach the Leusveld and the Heatherfield of Tonden, for more information: www.natuurmonumenten.nl. You can walk a  so called 'Klompenpad' direct from the house. The Log Distance walk 2, and the Trekvogelpad pass Loenen. The Streekpaden are als nearby. You can find more walking routes at wandelnet.nl. The routes by bike at Nederlandfietsland.nl are long distance; the long distance route across the Veluwe is in the neighborhood of the Guesthouse.

The attractively Hanze-citys Zutphen, Deventer, Doesburg, but also an old little village like Bronkhorst, are situated at a short distance. Museums in the neighborhood are for example the Kroller Moller at Otterlo; for more information www.kmm.nl, or the Openluchtmuseum, visit; www.openluchtmuseum.nl, and the Watermuseum at Arnhem. Other famous attractions are Burgers Zoo in Arnhem, Paleis het Loo and the Apenheul at Apeldoorn.

At Loenen is museum the Middelste Molen located; in earlier times farmers used water from underground by constructing sprinkles and streams, for making paper out of old clothes. This brought them some extra money for living. Paperfabrics and laundrys are part of the history of this area because of the clean water of the Veluwe and the forestwood nearby.

At walking distance, in the village Loenen, you have a supermarket and an little restaurant called 'het Ruifje'. At Zutphen, Deventer, Apeldoorn and Arnhem you have a lot of other restaurants. Loenen and Eerbeek have a swimmingpool and the lake of Busloo has several little beaches. 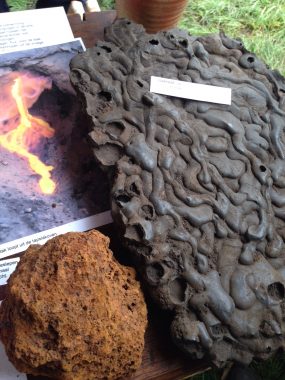 We found remains of ovens from the Middelages in the garden!

In the early Middelages on the edge of the Veluweforest little settlements fabricated iron. In high ovens the so called 'klapperstones were burned, they opened and the iron which was in it, came out. The black coloured remains called 'slak' left the oven on the upper side (picture). Recently a grave from Prehistoric times was found further in the street.